Flowers and Kinfolk with Karen and Justin 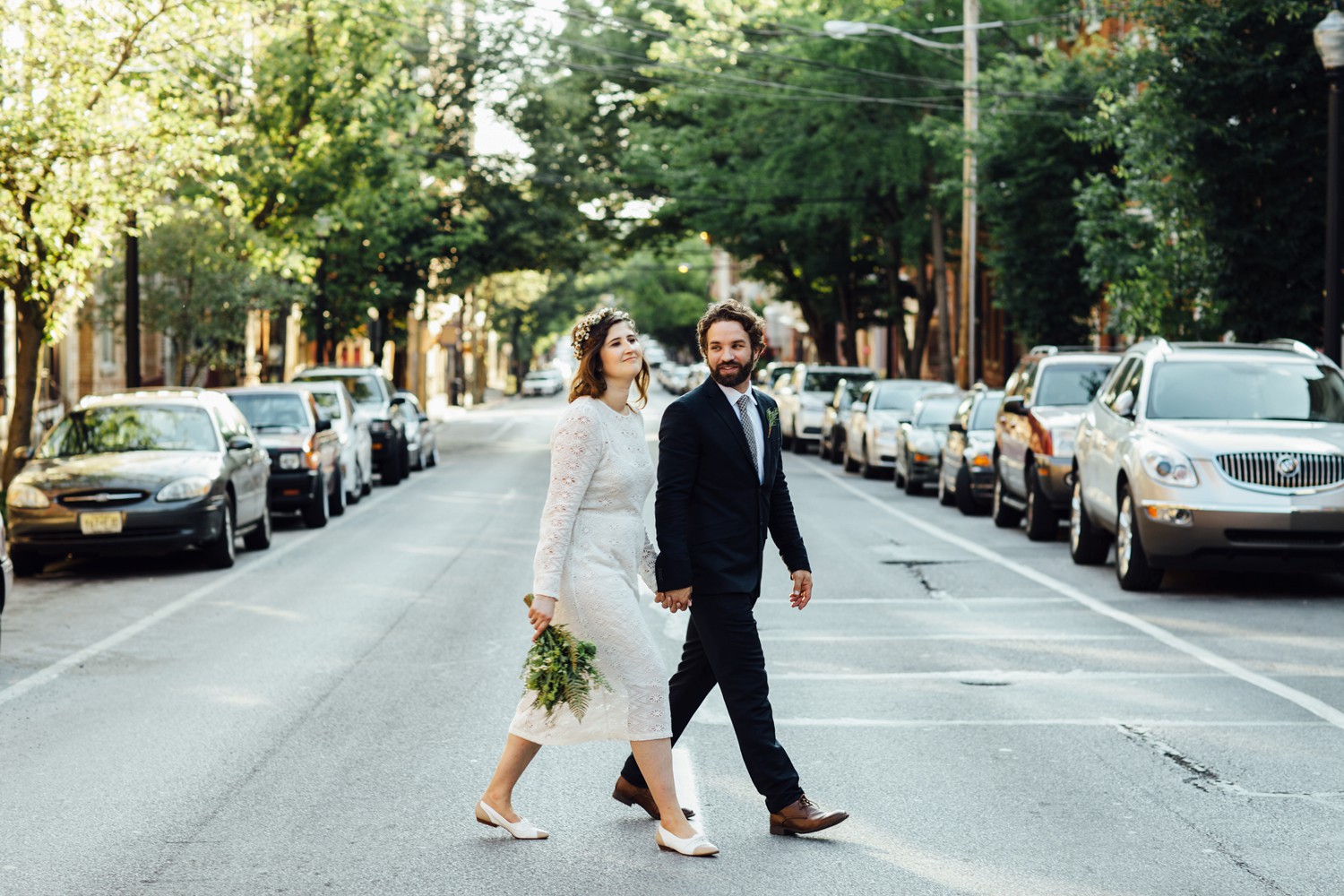 Modern Hearts: “When Karen (who is an amazing wedding photographer herself) got hold of us, she told us that they were looking into options for a laid back but beautiful backyard or garden filled with plants and flowers. Much like a Kinfolk inspired dinner, but with a ceremony attached. We’re all about keeping it low key and focusing on the connection between family and friends, so this sounded like music to our ears.
About a year later we arrived in Lancaster, Pennsylvania to document their sweet wedding celebration. To set the tone, Lancaster is based in Amish country and one of the oldest inland towns in the United States, surrounded by rolling hills with typical American architecture. In the middle of the town you’ll find Lancaster Central Market, known as the country’s oldest farmers’ market. And this is where Karen & Justin’s day started, off course – with buying pies and flowers at the market – to adore the beautiful Demuth Museum, which they rented out for their wedding.
Like Karen said, it was a very laid back gathering, with only their families and their best friends present. As for the officialities, they only had a ceremony – after that people had time to enjoy the fabulous food platters, chat, laugh and be merry. After some photos everyone scooped up some delicious Indian food and gathered around the table for an evening of quality time. Friends helped with all the styling, played guitar during the ceremony, the co-ordination of the food and both dads led their ceremony. A wedding where everybody got involved, which made it so personal and so touching. We were happy that we had the chance to experience it all and capture everyone having a fantastic time!” 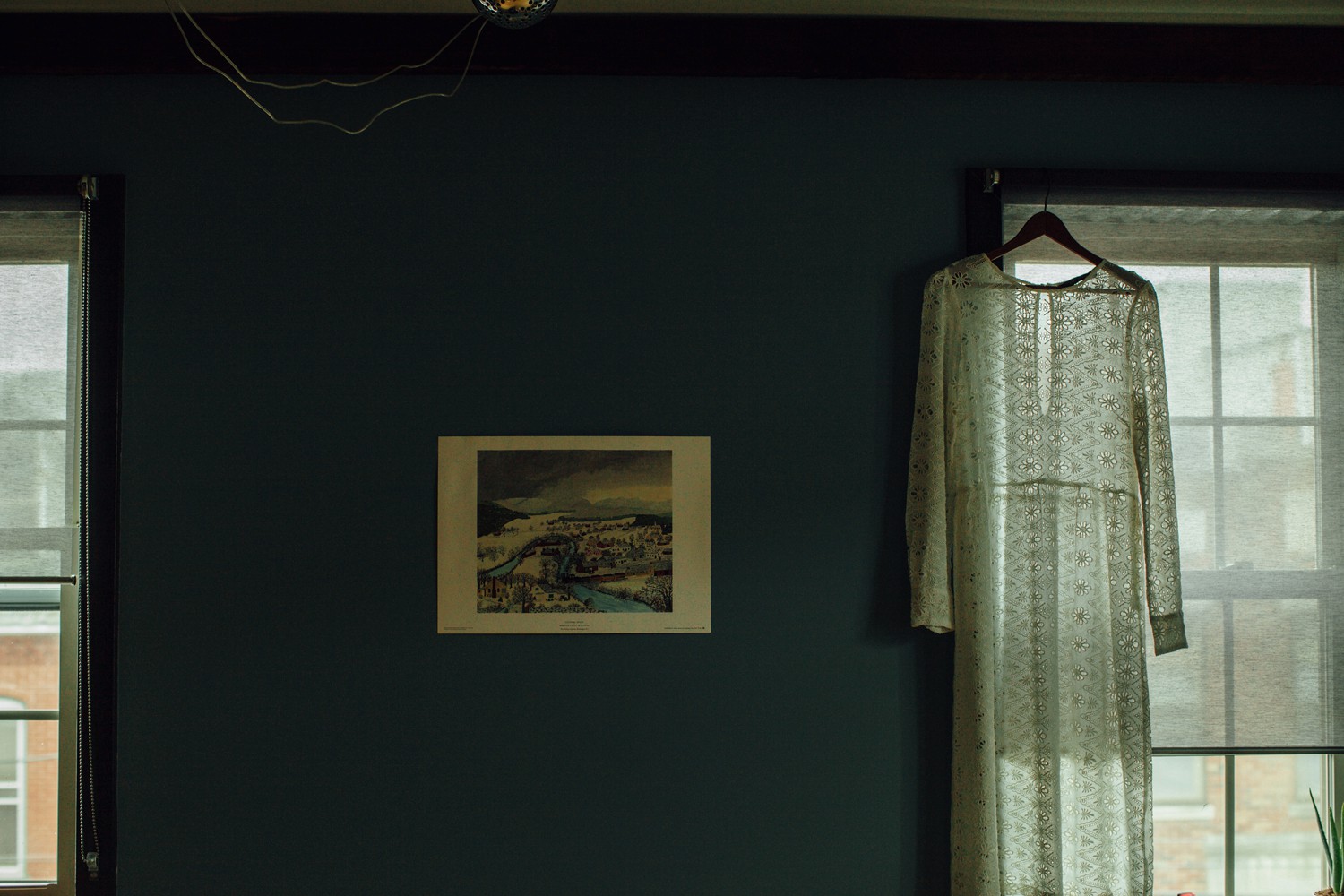 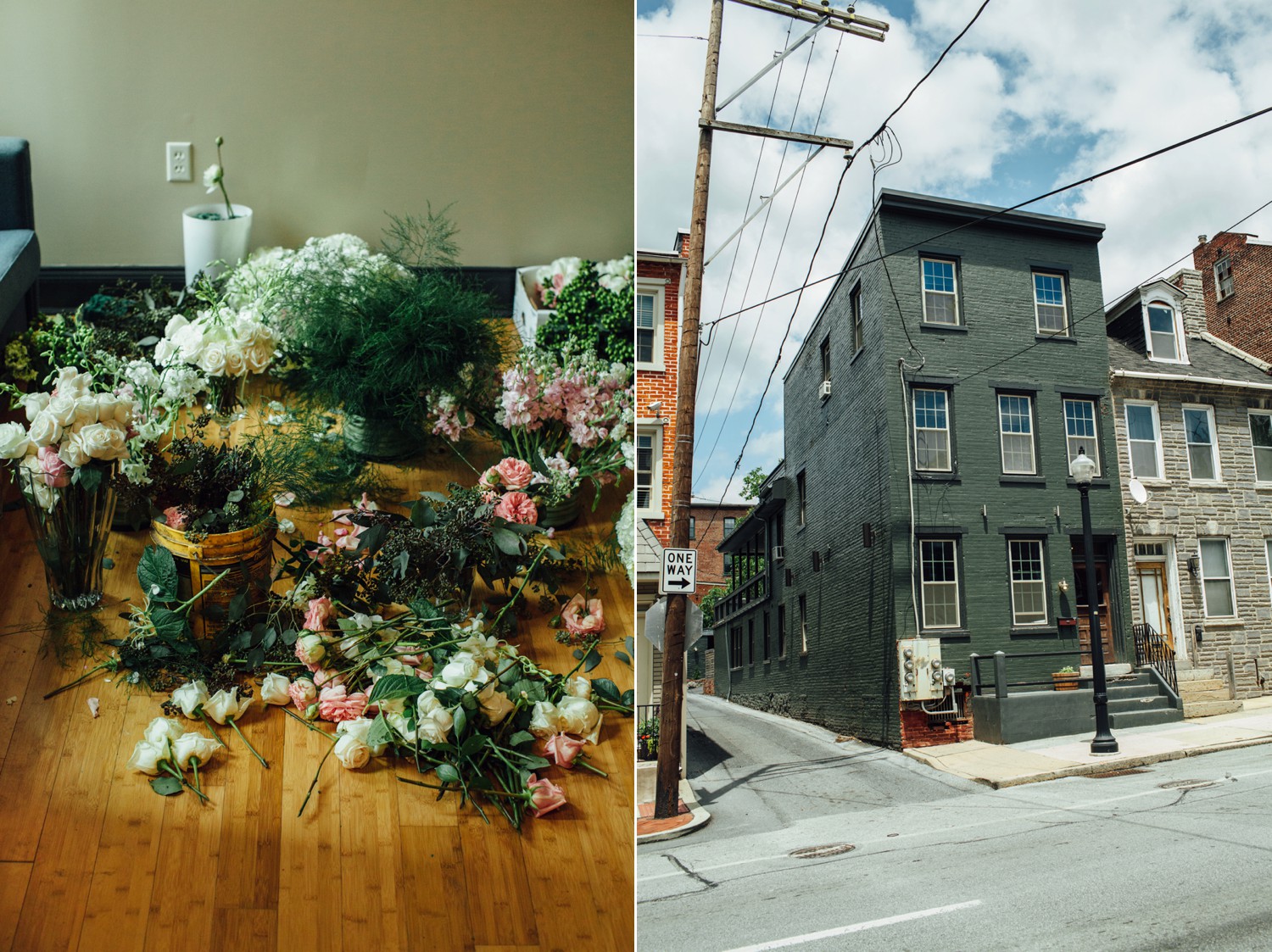 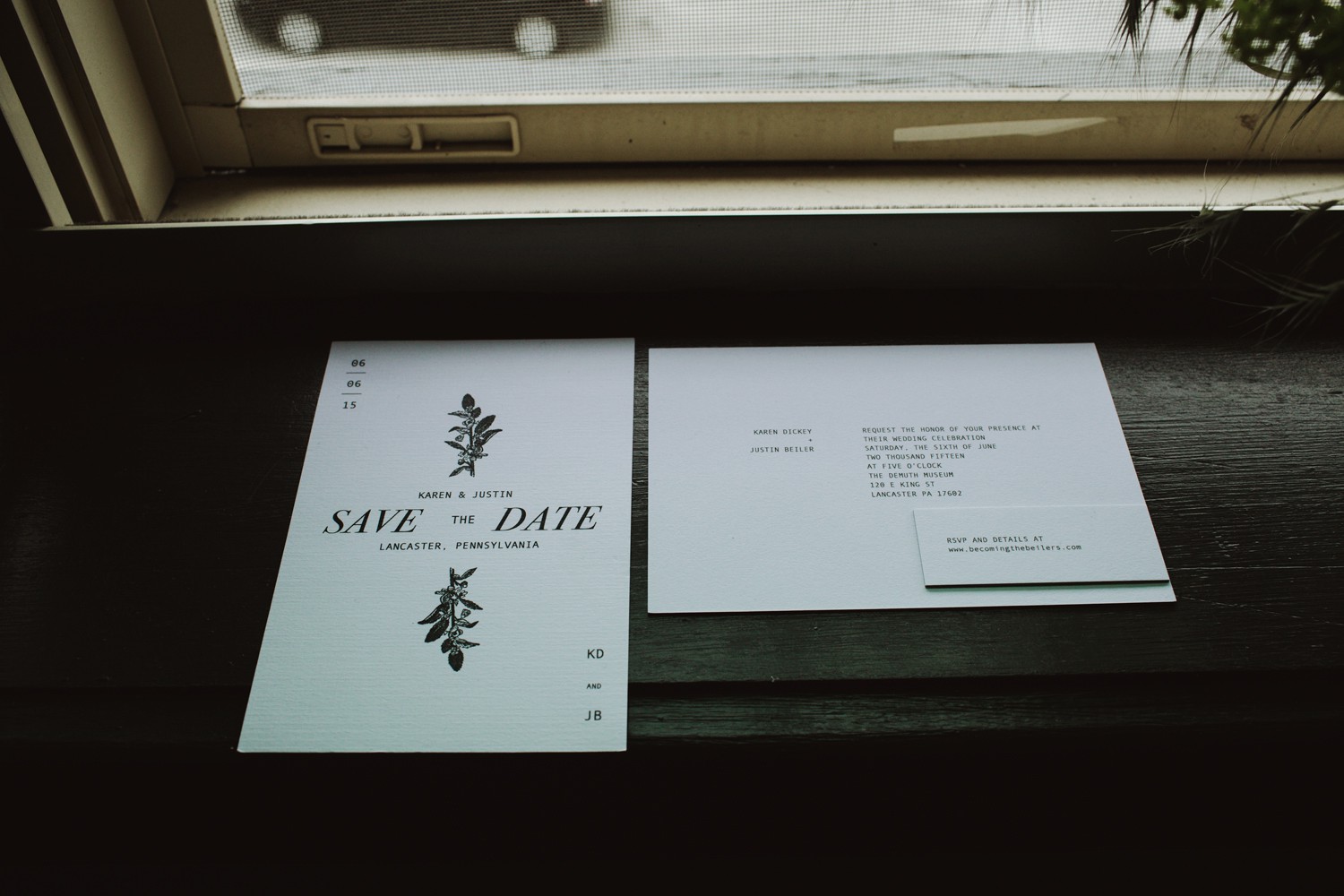 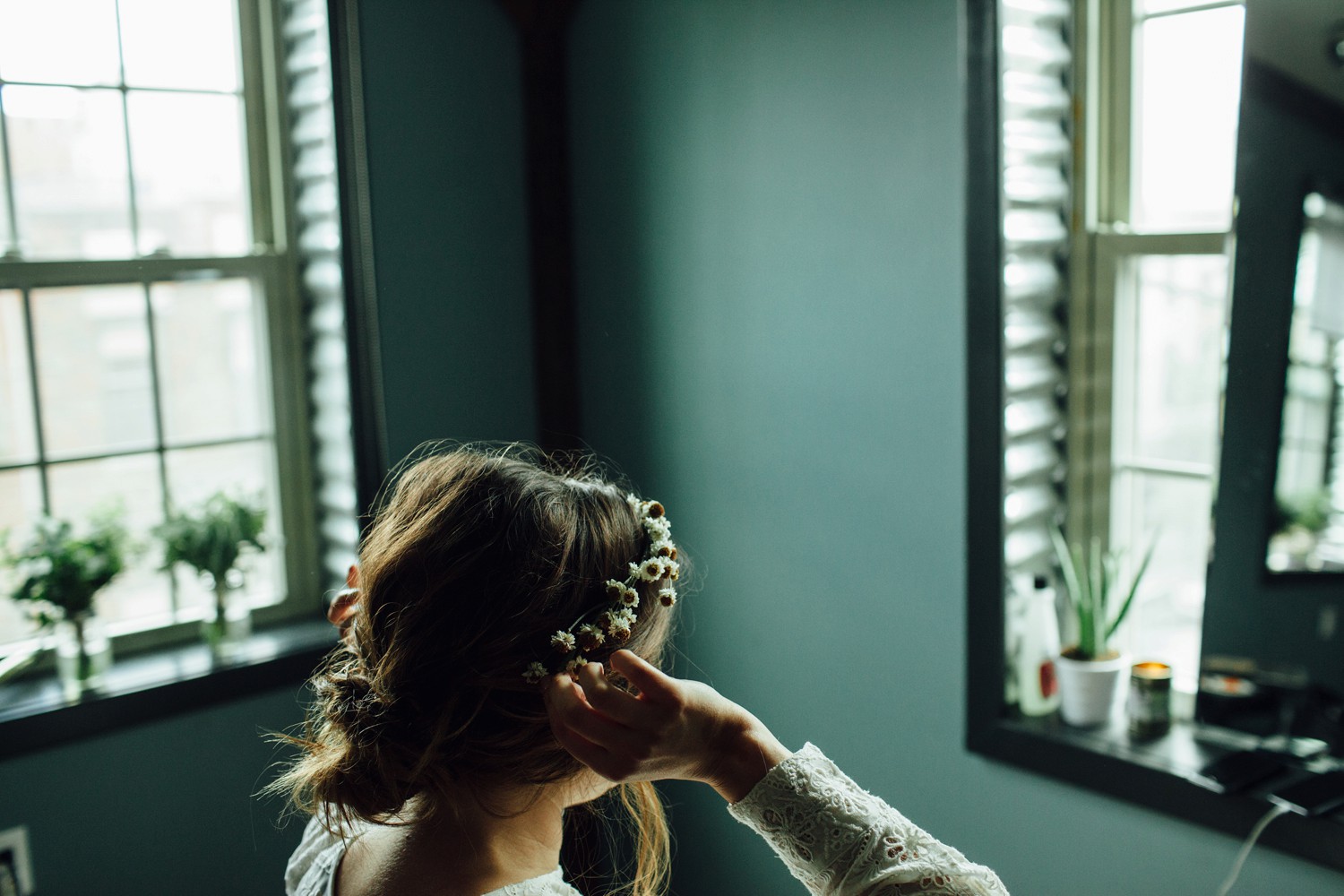 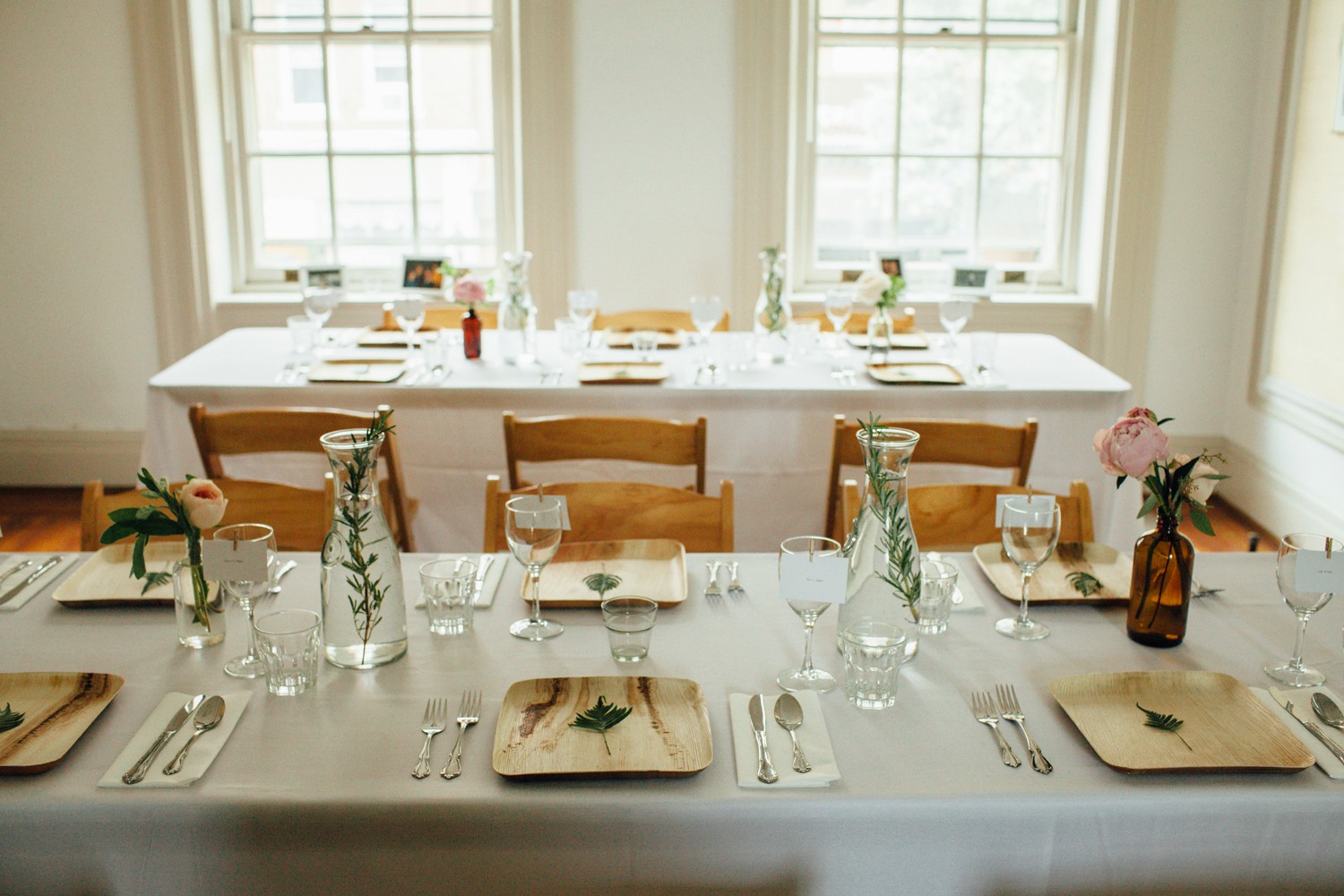 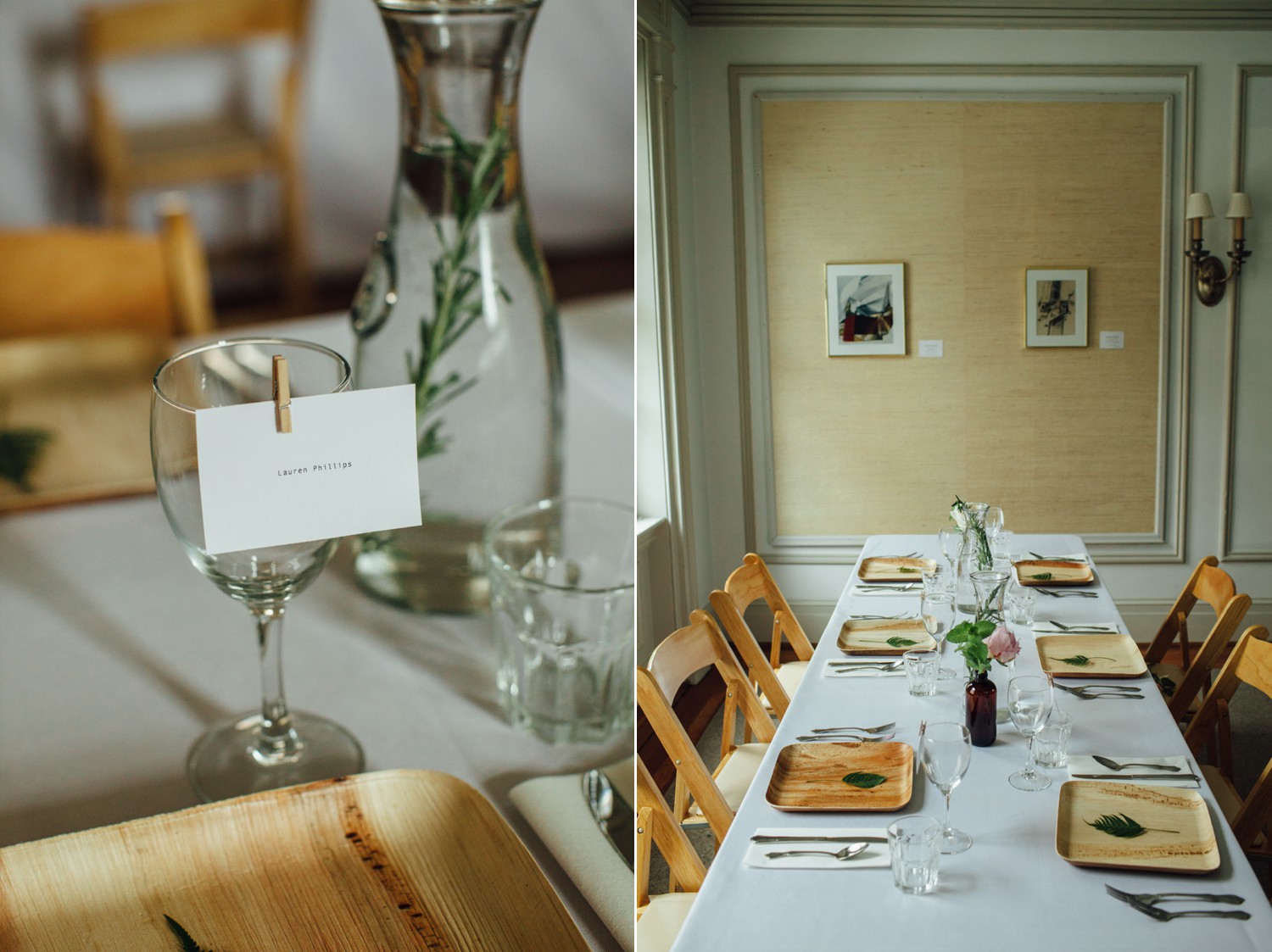 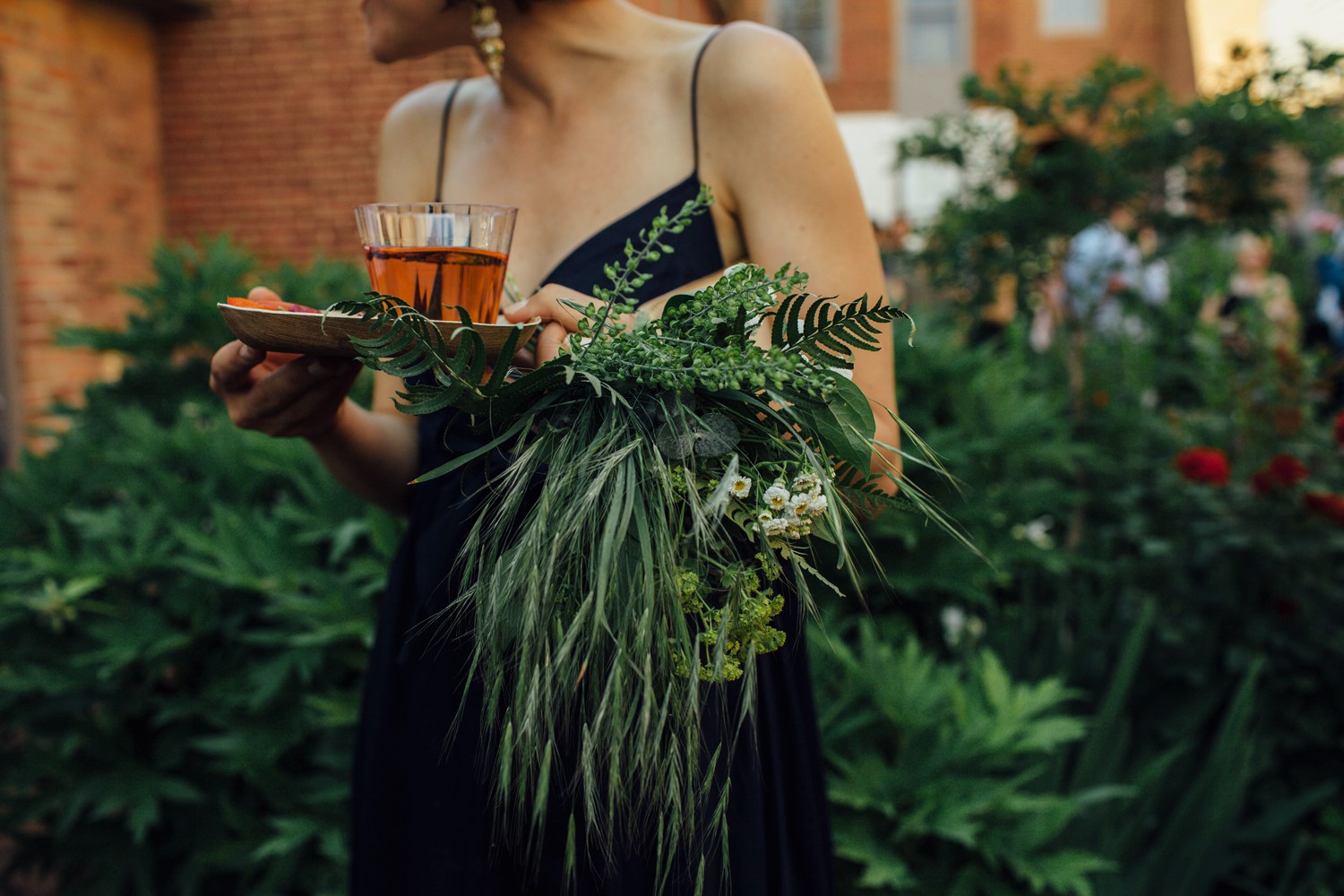 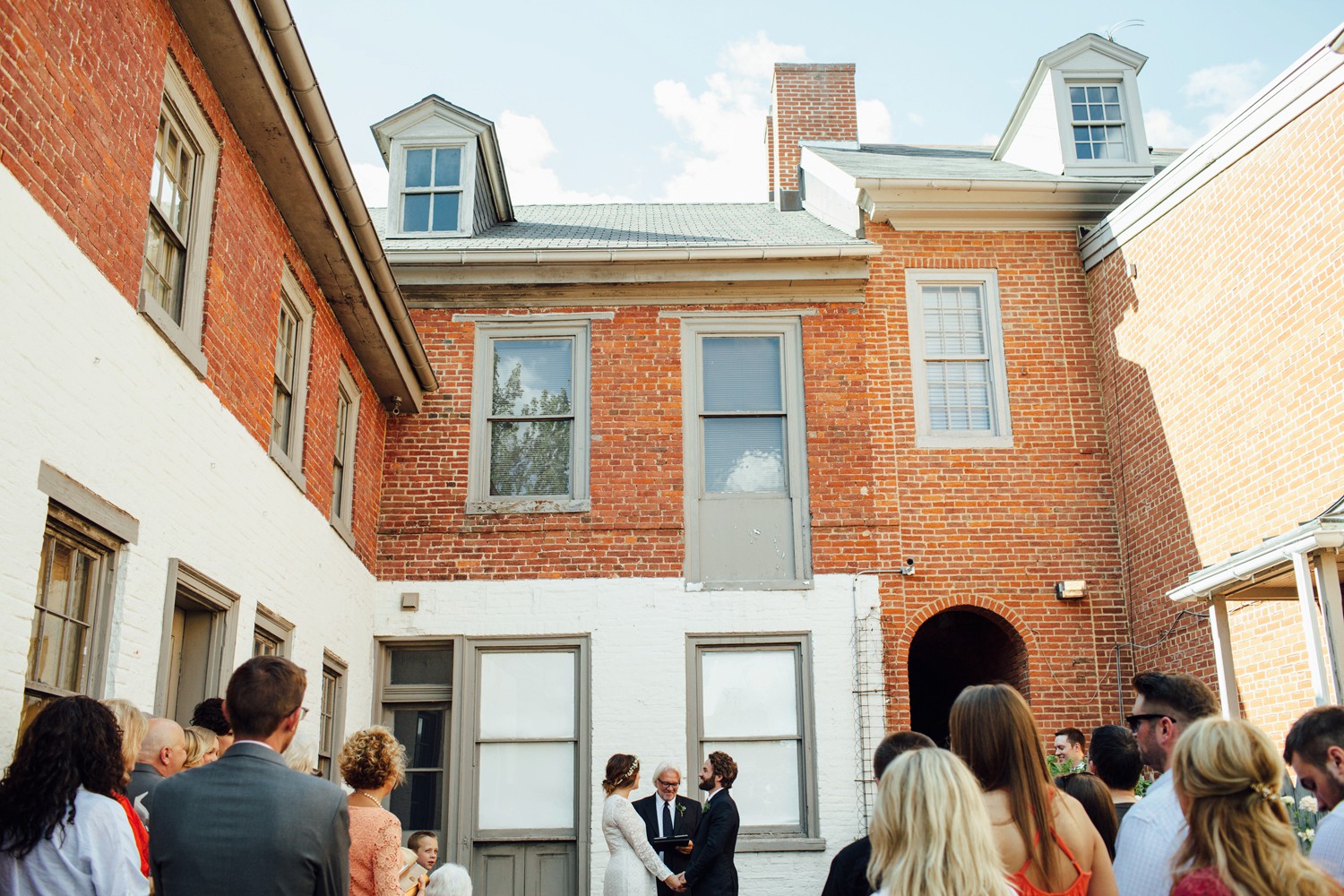 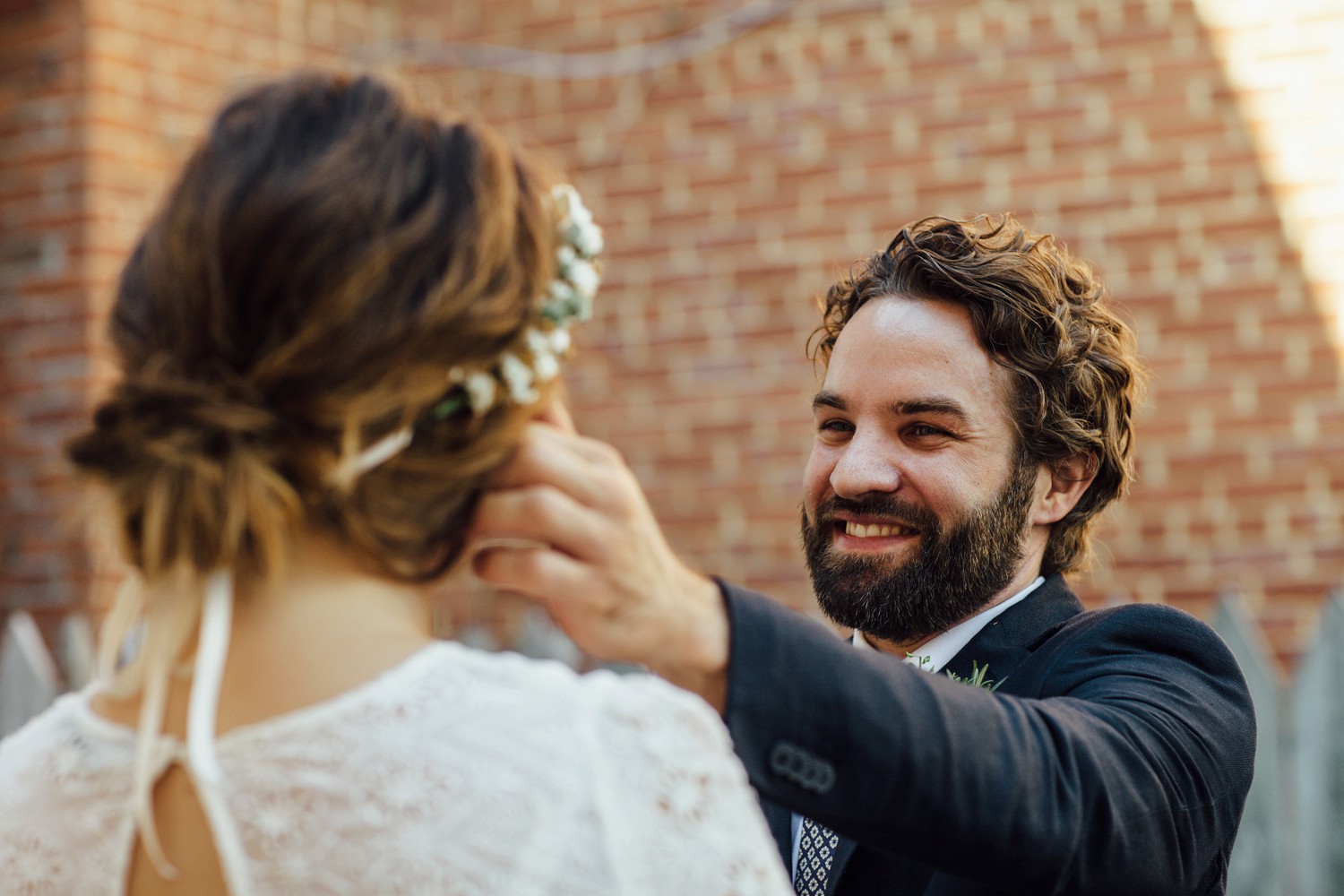 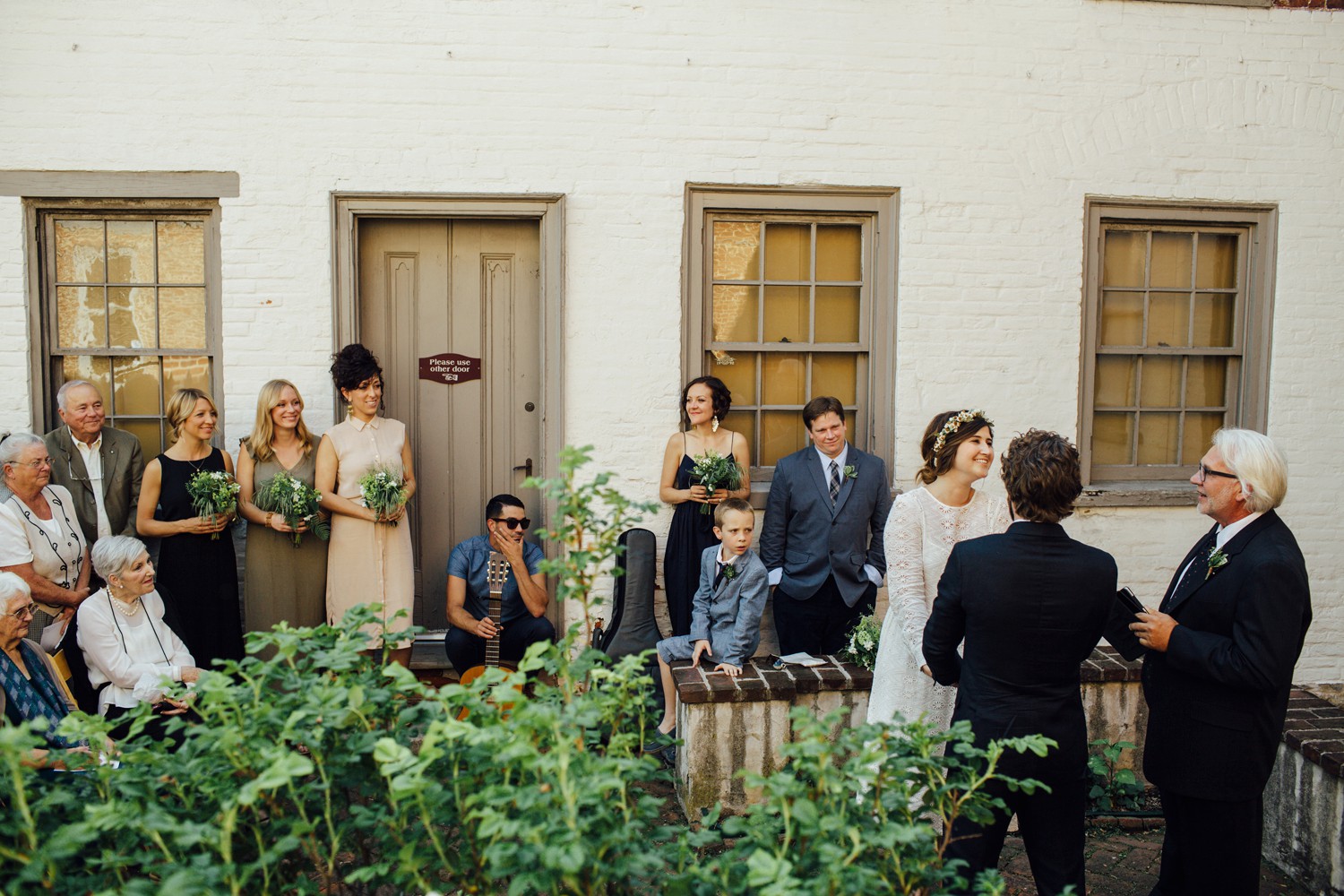 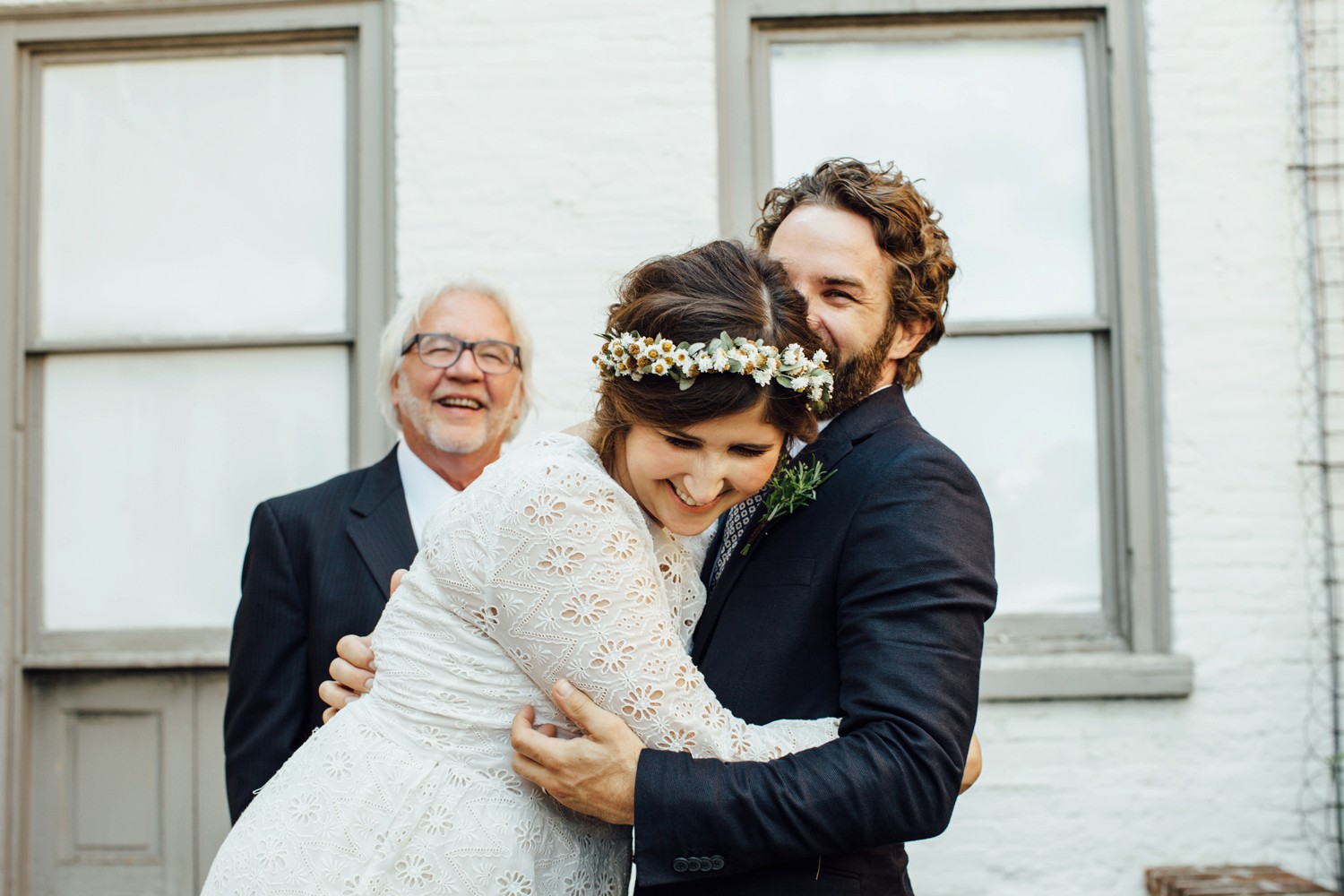 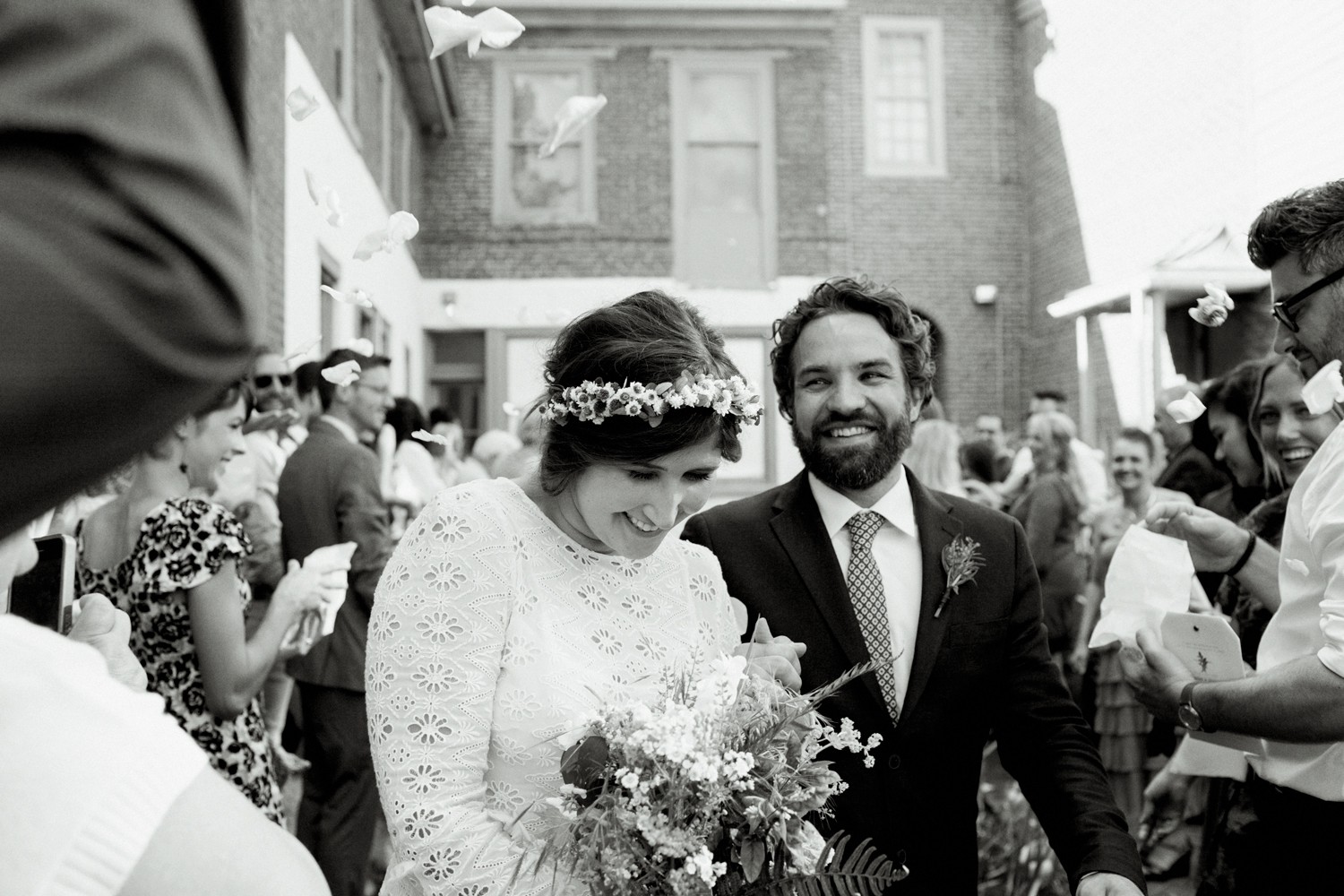 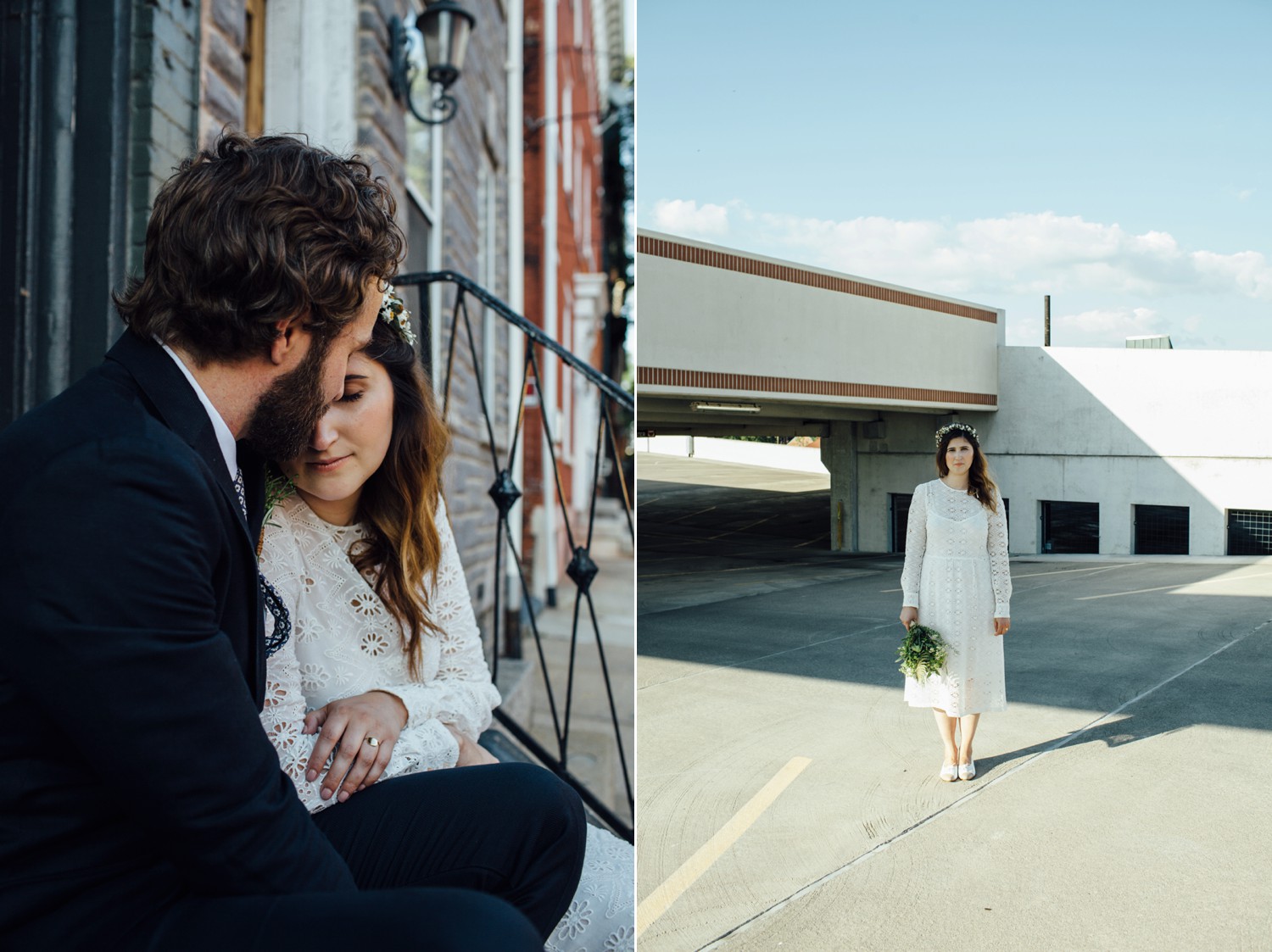 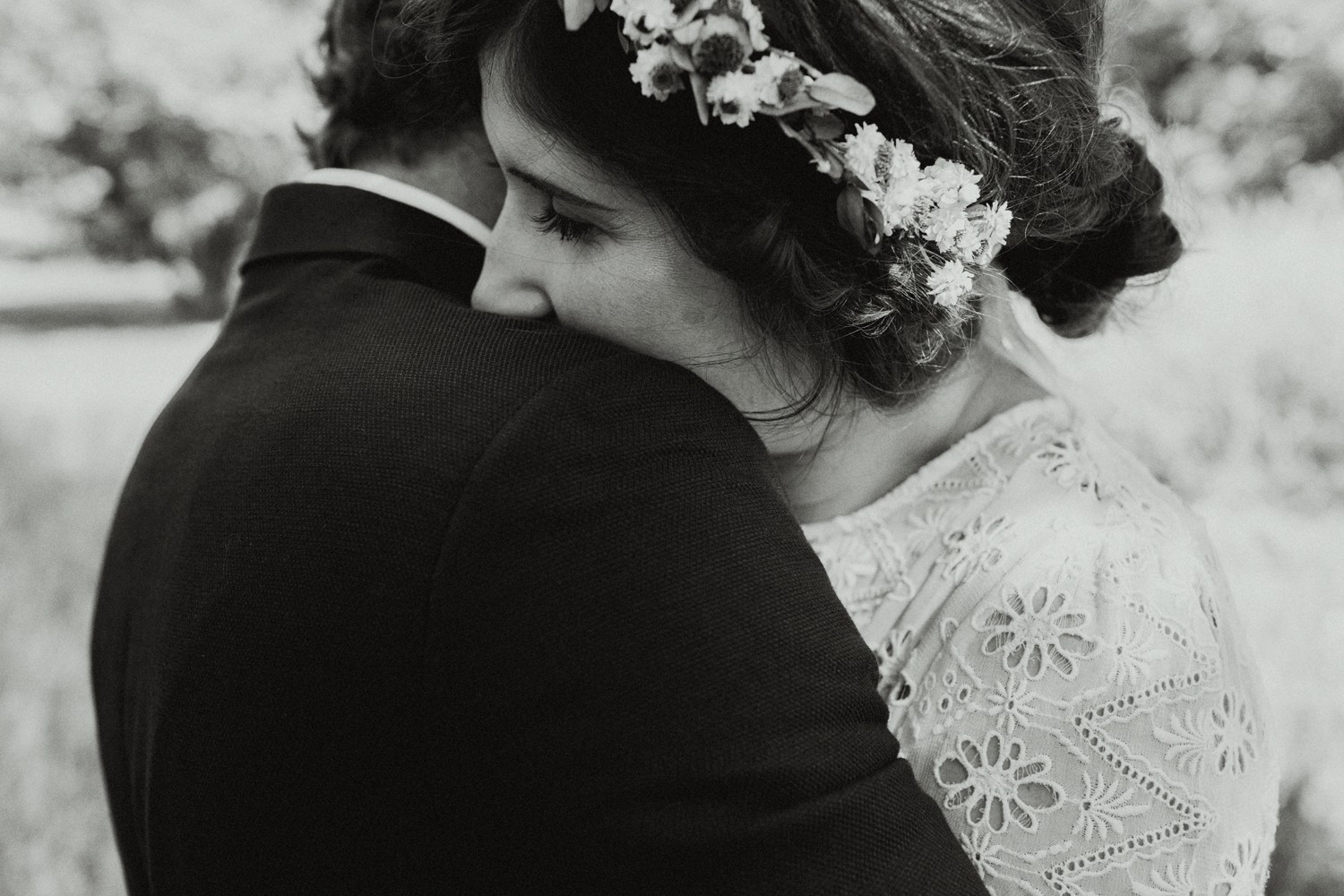 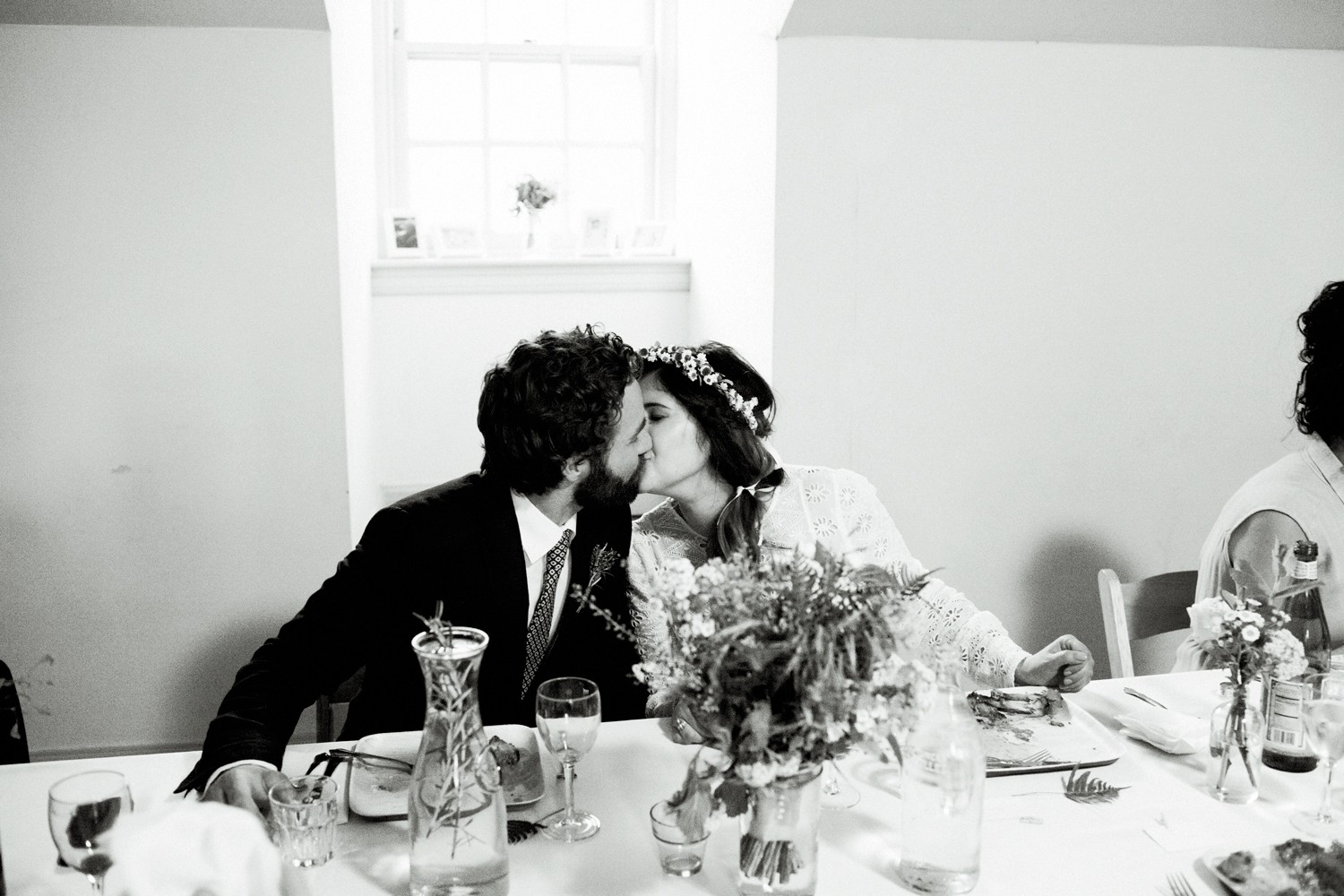 Can you tell us how you met each other?
Justin and I both grew up missionary kids, spending most of our lives in Vienna, Austria and Tokyo, Japan respectively. Many years after moving back to America, we met each other on a ski trip in Colorado that we had both gone to as students years prior, only this time volunteering as camp counselors. I was living in New York City at the time and Justin in Springfield, MO. I think when we met each other we knew, pretty much right away, that we had found our person.

What is your engagement story?
Our love for travel was one of the things that brought us together; fittingly, Justin proposed at the airport just after picking me up from a work trip I took to Sri Lanka. I had just traveled for 30 hours – getting proposed to was the very last thing I thought would happen that day.

What means marriage to you?
Committing to love each other always (even when we don’t). Sharing our lives. Buttoning each other’s hard to reach buttons.

Wedding Location (can you tell something about this?)
We got married in Lancaster, PA, which happened to be Justin’s hometown. There is a museum a block or two away from Justin’s house downtown, it’s in a townhouse that the artist’s family once lived in; it now is unoccupied. A bit unconventional for a wedding reception, as we had to put people in different rooms (and on different floors), but we kind of liked that it was different. We had to bring in everything ourselves (tables, chairs, linens, tableware) and though that was a lot of work, we liked that we got to handpick everything and make it our own. Our ceremony was in the garden.

Theme / Style
I’d say minimal but tasteful, but we didn’t set out for a specific style really. I think “un-wedding-y” is a word I used a lot (though obviously not a word).

Wedding songs
I walked down the aisle to Simon & Garfunkel’s “April”, played and sung by my close friend Paul Phillips. For the reception, we made a Spotify playlist full of our favorite songs.

A memorable moment
Moments before I was about to walk down the “aisle”, my legs began to itch uncontrollably and my right eye puffed up like a blowfish. We had just taken portraits in a field outside of town and I must of had some kind of allergic reaction to the brush. By the end of the ceremony my eye deflated and the red spots on my legs faded away, but oh my goodness, the odds and timing.

Honeymoon
We had two work trips scheduled in Europe for later that summer, so we decided to sandwich our honeymoon in between them. Justin had meetings in Budapest, Hungary – so we rented a car from there and drove through Hungary, Austria, and Italy – all the way down to Naples, where we ended as I had a wedding to photograph in Capri. Other than the origin and destination, we decided not to plan the rest and be spontaneous, finding places to stay using either Airbnb or HotelTonight. We got lost a few times, but for the most part we lucked out big time, especially since we were traveling during the height of the season.

What is your advice for a couple with wedding plans?
To do what makes you happiest, to do what is most “you”, and to throw tradition to the wind. We wanted our wedding to be a celebration of our marriage, not a production, so we kept it low key with no first dances or cake cutting, for example, and we were so glad we did.

The term DIY is thrown around a lot these days, but our wedding truly was a labor of love. I designed the save the dates, invites, seating chart, wedding website, programs & favors myself. Part of our story included a lot of time spent in Southeast Asia together, so we decided to cater in Indian food from our favorite restaurant. As we own a coffee/tea business (Eurasia Coffee & Tea), our favors were bags of Assam tea from Nepal (my husband picked these up while helping with earthquake relief just a month before our wedding.) For our cocktail hour, we purchased Trader Joe’s tastiest hummus’s (beet, edamame) and my maid of honor went to the farmer’s market early wedding day morning to buy veggies to serve with it. We had Fresh Lime Soda as one of our drinks, a popular beverage in Southeast Asia that we had come to love in our travels. Our moms squeezed 120 limes the day before the wedding so we could have this! Our wedding dessert was a local specialty, shoo-fly pie.

Photographer: Modern Hearts | Dress: Zara | Suit: H&M | Shoes: Vintage | Wedding band: Scosha | Engagement ring: Vintage | Venue: The Demuth Museum (Other than the garden that was adorned with flowers, our venue was a blank slate. We brought in everything ourselves – not sure what we would of done without our friends & family who did so much to help!) | Flowers: The Farmer’s Daughter Flowers, one of my best friends from our Brooklyn days together. (I chose chamomile & feverfew for my bouquet/flowers – a daintier version of daisies, which my mom had as her wedding flowers.) | Stationary: DIY (designed/printed by me, assembled with the help of my matron of honor, Kristina) | Favors: Ilam tea from Nepal | Food: Himalayan Curry & Grill